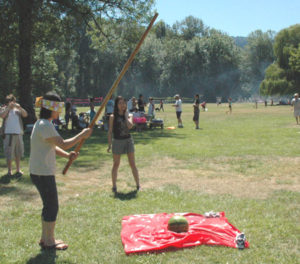 Some of you JETs may have been lucky enough to partake in this time honored Japanese tradition: Suika-wari. ????? Suika means ‘watermelon’, and wari means ‘to split’. It’s not smashing pumpkins, but close! Actually, I’ve only done suika-wari twice, and both times were over here in Seattle! Funny how that works.

So, suikawari is very similar to the Spanish tradition of pinata. You have one person who is blindfolded and given a stick. They are spun around, and people direct them towards the watermelon, which is sitting on a clean tablecloth on the ground. It’s different in that sense, since with a pinata you’re swinging in the air, whereas with suikawari, you slice down at it like a samurai! The blindfolded person has one stroke in order to split the watermelon. However, usually the stick is blunt, so it’s half splitting, half bludgeoning! It’s not pretty!

So, on July 4th, a bunch of my friends and my wife went to Lake Sammamish Park, and performed the suikawari ritual! I think ‘performed’ is fitting since while we were doing it, many people around us were getting really into it, and yelling and hollering. It was great! Many of them were Hispanic, so I think they got the gist real quick.

Here are the highlights of our Fourth of July Suika-wari!

Vince is the first victim… I mean, lucky contestant!

First he’s spun around like a top…or as they say in Japanese, koma.

Since he was the first contestant, we had a little fun with him and directed him
to nowhere in particular! 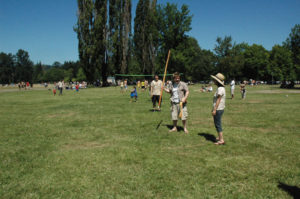 Un-blindfolded, and he realizes there is no watermelon in the vicinity! He took a nice
whack at the lawn! There I am in the background laughing my head off. Vince was a
good sport.

Here’s a good shot of Maya getting awful close to the suika on the red tarp.
Unfortunately, when she swung down, she missed it!

Here’s a shot of Shizuko looking very samurai-esque. By now, the people around us
are yelling directions. She eventually got close, but swung too far to the right.

Last up was Anna. She was first told to spin around the pole… 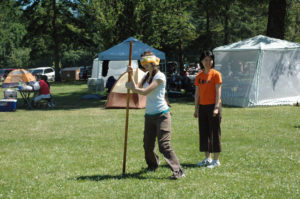 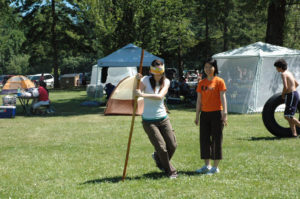 Below: Anna was awful close to chopping Maya in half! 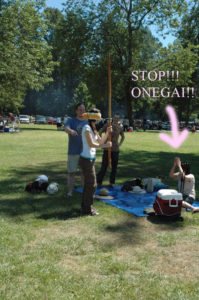 But, Anna lined it up and split the watermelon!! It was great! Lots of people laughing and
cheering!

We ate almost all of the watermelon, even the smashed up parts in the middle! Suika-wari is a lot of fun for everyone, and you get a nice cool snack at the end of the festivities. Try it next time you have a BBQ!

Registration is open for our Annual Meeting & Shin

Save the date for PNWJETAA's 2023 Annual Meeting a

We're accepting nominations for the 2023-24 PNWJET

DON'T MISS OUT! 💵 The Early Bird deadline for J