Skip to content
PNWJETAA will be hosting a group at the Seattle Storm’s opening game on May 22nd, Key Arena, at 4PM!
Thanks to the Consulate General of Japan Seattle for helping us arrange special group price tickets – the Consulate General will be attending, as well as Japanese community groups, and several national Japan media groups, to report on Ramu Tokashiki, the third female Japanese player from Japan to join the WNBA!
Cost: $15.00 Per Person (plus BrownPaperTicket Fees)
– We have a limited amount of tickets, and unfortunately, we will not be able to get any more.
-I will have the physical tickets, and if you’re unable to meet prior to the game, we will get the tickets to you the week of!
Facebook Event Page
When: May 22nd (Sunday) @ 4PM
Where: Key Arena
Why: Support the Seattle Storms and all their awesome players!
Join us for food and drinks after, location TBD! 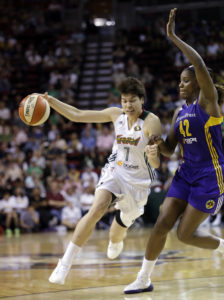